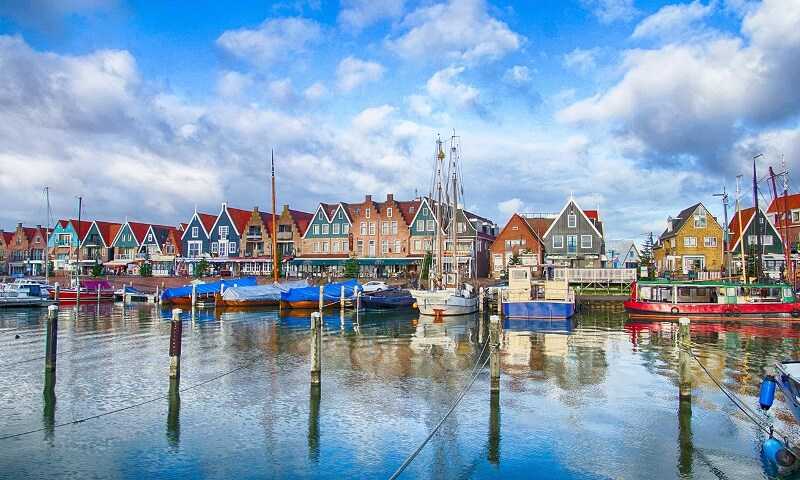 This centuries-old village is located on the Markermeer and was once connected to the North Sea via the Zuiderzee. Due to its favorable location on the water, the village had many fishermen. In contrast to the rest of Noord-Holland, Volendam was largely Catholic. That was not the only thing in which the people of Volendam deviated from the rest, they also had their own traditional costume and dialect, the Volendam. Today, tourists still come for the inhabitants dressed in traditional costume, but also for the beautiful fishermen’s houses and nice souvenir shops. Volendam is also known for its musical inhabitants: Volendam has produced several well-known artists and also the “eel sound”. And when you visit Volendam, don’t forget to eat a smoked eel sandwich!

What to do in Volendam?

Volendam is known as a fishing village with typical authentic little houses. Therefore, the best  way to discover Volendam is by walking around it, such as through the Dijk or the Doolhof. In  these old neighborhoods of the village, you’ll find lovely old fishermens’ houses in a labyrinth of  lanes, which have cast an enormous spell over painters and artists for centuries.
● The pop music which comes from Volendam is known as Palingsound (eel sound). Paling  (Dutch for ‘eel’) is a reference to the eels living in Volendam. You’ll find out in the  Palingsound Museum​ what the typical hallmarks of this musical style are.

● In the same building as the Palingsound Museum at the harbor, you’ll find the Smit  Bokkum ​eel smokehouse​ owned by the museum founder, Jan Smit. During a guided  tour, visitors will learn how eel is smoked in a century-old tradition. The in-house  restaurant serves delicious eel dishes.

● In the ​Volendams Museum​, the typical costume of the fishing village is on display, as  well as originally arranged rooms from the last century. Ship models, paintings and  other works of art can also be seen. One curious collection belonged to a Volendam  man who decorated the walls of his room with mosaics made from 11 million cigar  bands (which can also be seen today in the Volendam Museum).

● Where there’s costumes, you’ll also find the Dutch ​wooden shoes​, known as ​klompen ​ . In  the ​Wooden Shoe Factory ​at the harbor, you’ll learn more about the making of these  comfy wooden shoes, which you can also purchase for your garden at home.

● Holland and cheese always belong together. You can also buy this in Volendam, at the  harbor, in the ​Cheese Factory Volendam​, where the traditional production methods  are explained. An experience for all the senses!

● As with many other attractive Dutch places, the latest technology has taken hold even  in traditional Volendam. ​Experience Volendam​ shows living quarters from 1916,  amongst other things, in a holographic display, and a stormy ship voyage from the same